In the plant world, some families or genuses are bigger than other. The dracaena genus has more than 100 species, ranging from petite houseplants to massive trees. The houseplant varieties are usually easy to care for, but can be sensitive to changes in temperature or light. Growing a dracaena plant at home can help clean the air in your home, but you’ll want to exercise caution if you have any four-legged friends living with you.

The Dracaena Family is a Big One 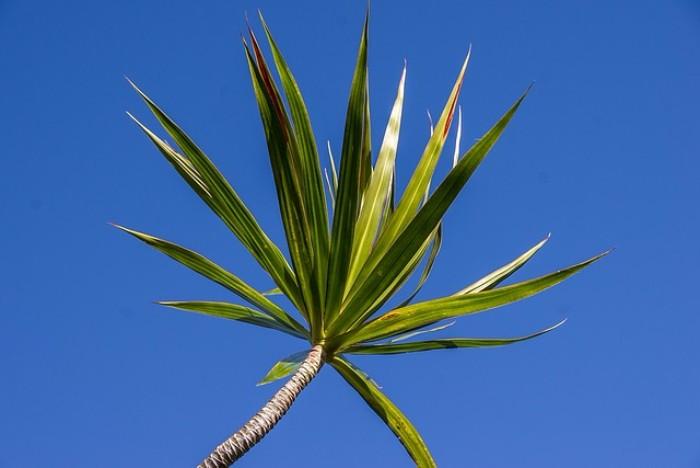 According to Dave’s Garden, there are more than 100 species in the dracaena family (m﻿﻿﻿﻿﻿os﻿﻿﻿t sou﻿﻿rces put the number around 120). While many varieties are cultivated and intended to be grown as houseplants, a fair number of varieties are also meant to survive outdoors. A few varieties develop into stately trees, while some, such as the so-called Lucky Bamboo, remain tiny.

Two of the more popular houseplant species of dracaena are dracaena fragrans and dracaena marginata. Both are native to Africa and will grow quite large (up 50 feet tall) if planted in the ground and left alone. Grown as houseplants, though, they are much smaller.

One of the common names for dracaena fragrans is the corn plant, because it sort of resembles corn stalks. The plant produces upright, spiky leaves on stems. Depending on the specific varieties, the leaves might be solid green, green and white striped or yellow and green striped.

According to the Missouri Botanical Garden, “fragrans” in the species’ name refers to its flowers, which are supposed to be very fragrant. But most people growing a type of corn plant in their homes won’t get any flowers.

Dracaena marginata also produces spiky, upright leaves on its stems. But its leaves are much narrower than the leaves of the corn plant, usually about a 1/2 inch wide compared to 3 inches wide. The leaves are also a different color. Some varieties have dark, solid green leaves while others have red-tinged leaves.

In the video from Growing Wisdom, gardener Dave Epstein introduces you to a few common varieties of dracaena fragrans and dracaena marginata. He also provides some pointers for caring for your plants.

A third popular species of dracaena, Dracaena braunii, is often known by its common name, Lucky Bamboo. The thing is, lucky bamboo isn’t a type of bamboo at all. It is called bamboo because it closely resembles the tall grass, but pretty much everything else about it is different.

The plant comes from parts of Asia and Central Africa. It’s believed to have been used as a good luck charm for thousands of years.

Unlike other varieties of dracaena, lucky bamboo is usually not planted in soil. Instead, it is placed in a vase or jar that has a few inches of water in it. Keeping the plant in water instead of soil will provide slow, steady growth.

If you are growing lucky bamboo, keep in mind that the number of stalks you choose to grow has a specific meaning. Growing two stalks is meant to stand for double luck or love, according to the Old Farmer’s Almanac. Three stalks stands for happiness, long life and wealth. Growing 21 stalks are thought to bring you great health and great wealth.

The plant didn’t get its name because it looks like a dragon (because it doesn’t), but because some varieties produce a red colored sap when their leaves are cut. The red sap was thought to be dragon’s blood at one point in time.

There’s an interesting myth about the dracaena family. Apparently, the Greek hero Heracles killed a dragon in a fight. A number of dragon trees (dracaena draco) sprouted up at the site of the killing. People believed that the trees were fertilized and produced by the blood spilled by the dragon.

Dracaena plants are monocots, which means that their seeds have a single cotyledon. The plants’ monocot natures also determine how their leaves grow, what their flowers look like and how their stems develop.

If you look closely at a leaf of any type of dracaena plant, you’ll see that it has veins that run up and down it. In contrast, the leaves of dicot plants usually spread across the plant without a discernible pattern.

The stems of a monocot plant tend to have what are called “vascular bundles.” These bundles deliver water up to the leaves from the roots. Finally, the flowers of a monocot plant tend to feature patterns in multiples of three. A monocot flower might have three or six petals, for example, while a dicot flower will have petals in multiples of four or five.

One interesting fact about dracaena leaves is that they tend to fall off from the lower areas of the stem and grow from the top of the plant. It’s normal for the plant to lose some leaves from time to time. Once those leaves fall, the area for the stem will scab over.

Over time, that can lead to a very lanky or very tall plant with a lot of bare stem. One way to control the plant’s height is to prune it. Pruning it will allow it to develop a bushy growth, since a new stem will start to grow next to the area that was cut off.

Although many people consider dracaenas a fairly fuss-free, easy-to-grow houseplant, they can be a bit sensitive. One common thing that can be particularly problematic for them is fluoride.

According to Penn State Extension, exposure to too much fluoride (more than 1ppm) can cause the leaves of the plant to turn brown or to develop burned looking tips. If you are growing any type of dracaena plant and you live in an area with fluoridated water, you might try watering your plants with collected rainwater or bottled water instead of tap water.

The plants can also be a bit sensitive to light and cold temperatures. If you purchase a dracaena plant in the middle of winter, the time it spends traveling from the heated garden center to your car and from your car to your home might be enough to give it a shock, leading it to drop some leaves.

Although the plants can tolerate some shade, if you leave yours in a very dark room, it’s likely to drop some leaves. According to Better Homes and Gardens, the plant will eventually get used to lower light conditions. But those first few weeks in a dark room can be very shocking.

Dracaena Plants Purify the Air But Are Toxic

According to NASA, a number of different dracaena plants act as air purifiers. They absorb compounds and toxins such as formaldehyde and benzene from the air. If you live in a home that’s closed off, adding one dracaena plant for every 100-square-feet or so can really help improve the air quality.

There’s one caveat, though. Although they are great at purifying the air, dracaena plants also tend to be toxic to pets. If you have a curious kitty or dog living you, it’s important to keep any type of dracaena plant well out of their reach.

Do you want to learn more about growing lucky bamboo, a corn plant or other varieties of dracaena? You’ve come to the right place. We have a lot of articles all about dracaena. Take a look at the sidebar and see for yourself!

Source for “Did You Know” fact.