The Complete Guide to Growing Potatoes

Potatoes need slightly acidic soil, a lot of sunlight and a lot of water to thrive in your garden. The plants are annuals usually grown in zones 1 through 7. Along with growing potatoes in the ground, outdoors, many gardeners are able to successfully grow a crop of potatoes in a container or indoors.

The trick to growing indoors or in containers is supplying the potato plants with everything it needs, including well-drained acidic soil, moderate temperatures and ample light.

Since the part of the potato that you eat grows underground, the quality of the soil you plant potatoes in is particularly important. Potatoes are actually an acidic soil loving plant and will grow best in soil that has a pH of less than 5.5, according to Cornell University. The more acidic the soil, the better able the plants are to resist diseases such as scab. 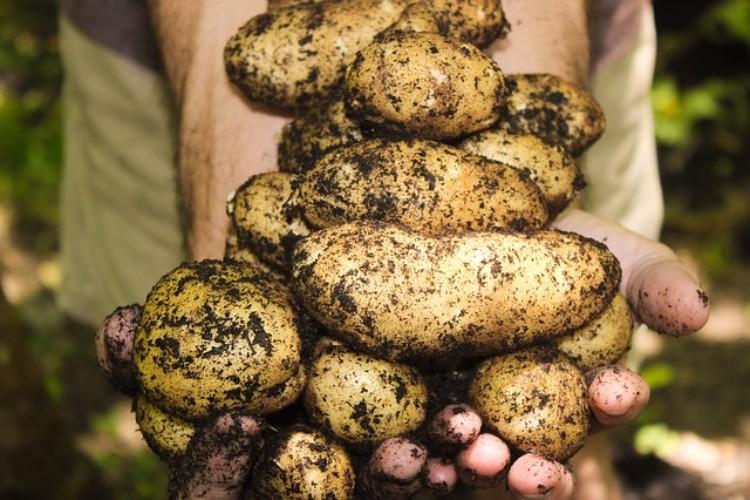 Along with being slightly acidic, the soil you plant potatoes in should be well-drained and loose. If the soil is heavy or dense, it is difficult for the tubers (the part of the potato you eat) to grow. You'll end up with small or oddly shaped potatoes.

Although potatoes prefer acidic soil, you can get away with growing them in more neutral conditions. A pH of up to 7.0 can be tolerated, but you'll want to choose the variety of potato carefully. Since there's a high risk for disease the less acidic the soil is, look for varieties that can resist scab and other potato problems.

Potatoes can handle a bit of cool weather, but won't survive a hard frost. The plants are grown as an annual in USDA hardiness zones 1 through 7. You can successfully grow them in warmer zones, but might need to wait to plant until the fall, so that the plants have time to grow without the high heat of summer.

If you are planting potatoes in the spring, it's usually recommended that you put the seed potatoes in the ground a few weeks before the last frost date in your area. Often, you can plant the potatoes as soon as you can work the soil, so long as the soil temperature is 45 degrees Fahrenheit, according to the Seed Savers Exchange.

Your seed potatoes, which are simply potatoes left over the previous season, need a bit of prep before you can plant them in the garden or in a container. Put the seed potatoes in an area where the temperature is between 60 and 70 degrees Fahrenheit, starting at least a week before you plan to plant.

Letting the potatoes rest in a warm area before planting encourages them to sprout. The sprouts will end up forming the rest of the potato plant. Once you're ready to plant, cut up the seed potato into several smaller pieces. It's very important that each piece contain at least one sprout or eye, otherwise it won't produce a plant.

Potatoes might grow beneath the soil, but don't think that that means they can get by without any light or can grow in low light conditions. The plants actually need full sunlight, at least six hours daily, to thrive.

When looking for a place to plant potatoes in your garden, choose one that doesn't get a lot of shade. If you are growing the potatoes indoors, it's important to put a grow light or two above the plants, so that they get ample light. You might be able to provide sufficient sunlight if you put the plants in a south facing window.

Although potato plants need full sun to thrive, it's important to understand that the tuber part of the potato, the part you actually eat, should be covered up and shield from sunlight. The potato itself can turn green if exposed to the sun's rays during its growth, according to Bonnie Plants.

The green spots will make the potato taste bitter and are slightly poisonous. To protect the quality of your potato crop, make sure the tubers are fully covered by soil and that only the leaves and stems of the plants are exposed to sunlight while they grow.

How much water your potato plants needs depends on where they are in their growth cycle. During the active growing phase, it's important to keep the soil consistently moist and to give the plants up to 2 inches of water per week.

A consistent supply of water is particularly important starting six weeks after planting. At that point, the plants are beginning to form the tubers. If the potato tubers get an uneven amount of water or if the soil dries out between waterings, they are likely to crack or develop weird shapes.

If you're not sure how to tell if your potato plants need water, the video from JB Seed Potatoes gives you an idea of what to look for. The leaves of thirsty potato plants will start to curl up, a sign that it's time to water.

There is one time when you want to ease up on watering your potato plants. That's when the leaves of the plant begin to die back and begin to turn yellow. At that point, the potato plant is putting its last bit of energy into producing healthy tubers.

Let the leaves dry up for a few days, then start to dig up the potatoes. It's easier to dig up the tubers when the soil is dry, which is another reason to ease up on watering.

Some plants do better when grown near or alongside of potatoes than others. Some plants shouldn't be grown anywhere near potatoes. The reasons why are a mix of garden folklore and fact. For example, tomatoes and potatoes have many of the same predators and the same diseases (they are related). To protect both plants, it's best not to grow them on opposite sides of the garden.

Marigolds planted near potatoes help to keep away beetles and other common potato pests. Potatoes are also often planted alongside of corn and beans.

Although you might most commonly see potatoes grown outdoors, in the ground, the plants can do well in containers, as long as the pots are big enough.

You can also try to grow potatoes indoors, provided you have enough room and the right equipment. The plants will also grow well in a greenhouse.

If you're ready to jump in and start growing potatoes at home, we have a lot of information to help you get started. Check out the articles in the sidebar to find detailed information on growing potatoes indoors, in containers, or in straw. We've also got advice on ways to plant potatoes to maximize yields and recommendations for the best fertilizer and soil to use for a healthy potato crop.