The Ultimate Guide to Growing Tomatoes

Tomato plants need a few things from you, the gardener, to produce a decent crop of fruit. First of all, tomatoes are tropical plants and need warm temperatures to germinate and to grow.

The plants also need plenty of sunlight, from the time they are small seedlings through maturity, as well as a consistent level of moisture throughout their growing season. Although it’s best to grow tomatoes in a spot that gets about eight hours of sunlight daily, you can try to grow them indoors under grow lights or in a greenhouse.

We’ll go into a lot more detail below, but here’s a quick visual reference you can take with you.​

One way to describe the hardiness of tomatoes is to say they aren’t hardy at all. They are a tropical plant and are grown as an annual in most areas. They won’t tolerate the cold and will die when the frost hits.

For that reason, you want to wait until a few weeks after the last frost in your area to plant tomato seedlings outdoors, whether you plan on growing them in the ground or in a container.

Usually, it’s recommended that you start tomato seeds indoors, anywhere from six to eight weeks before the last frost in your area. Tomatoes have a long growing season, so starting the seeds early will help you get the most from your plant before the frost strikes in the fall.

The plants also need warm temperatures to germinate, which is another reason to start them indoors. According to Modern Farmer, tomatoes germinate best in soil that’s about 80 degrees Fahrenheit. They won’t germinate if the soil temperature is lower than 60 degrees. In many areas, soil temperatures don’t reach those temperatures until the summer, too late to start tomato plants from seed.

The video from Gardener’s Supply shows you exactly what you need to start tomatoes from seed indoors. It also walks you through the process of growing the plants from seed, transplanting them as they get older, and finally, taking care of the tomatoes in your garden.

Tomatoes can be a bit demanding as a garden grown vegetable. They need plenty of sunlight, lots of water and a fair amount of food, as long as it’s the right type of food. You want to be careful not to give your tomato plants too much nitrogen, as if doing so will encourage the plants to make lots of lush, green leaves, but not much fruit. 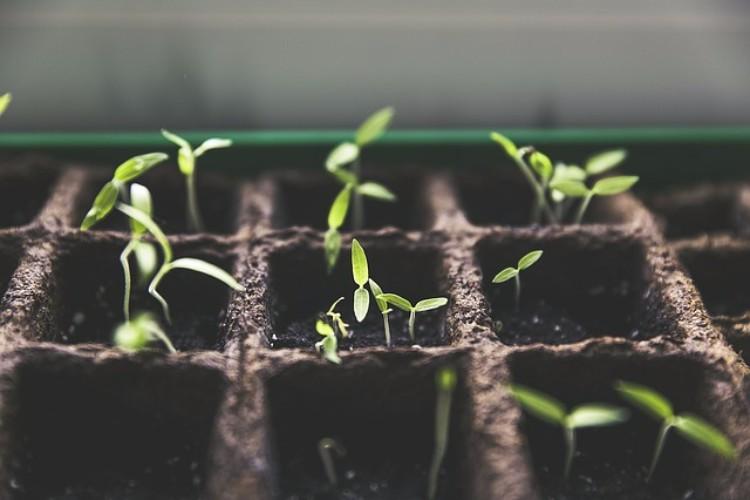 One of the trickiest things about starting tomatoes indoors is making sure they get enough light. Often, indoor areas don’t get adequate sunlight, so you’ll need to have a few grow lights to put over your tomatoes once the seeds sprout. Before the seed sprouts, you don’t have to worry about providing them with light.

Tomatoes are happiest when they have a consistent supply of water. The plants produce long roots, meaning they can handle a long drink of water on a regular basis. The Old Farmer’s Almanac recommends giving tomatoes at least two inches of water per week, which is about 120 gallons for every 100-square-feet of growing space.

Adding a layer of mulch over the soil is one way to help your tomatoes maintain consistent moisture levels. Mulch helps keep water from quickly evaporating from the soil. As an added benefit, it also helps control soil temperature and can help suppress weeds.

Tomatoes prefer relatively neutral soils, with a pH between 6.0 and 6.8. But, according to Cornell University, the plants can grow in slightly acidic soil, with a pH as low as 5.5.

Ideally, the soil you plant your tomatoes in will drain well. Although the plants have deep roots and love their moisture, they aren’t fans of water-logged, soggy soils. Super wet soils can lead to root rot and other diseases.

Sometimes, it just makes sense to grow certain plants alongside or near certain other plants. Tomatoes have a number of companions, or plants that they grow well with. One of the most popular companion planting combinations is growing tomatoes with basil.

Not only do tomato and basil make up two thirds of a Caprese salad, they also support each other in the garden. When basil is grown next to tomato, the taller tomato plant provides some shade and protection, keeping the basil from frying in the sun. The scent of basil also helps protect the tomato plant from pests.

A few other good companions for tomato plants include:

Tomatoes don’t get along with everyone, though. Since they are in the same family as potatoes and since both plants have deep root systems, it’s best to keep your tomatoes and your potatoes far away from each other.

It’s also a good idea to grow members of the cabbage family far away from tomatoes. The two plants work against each other. If you grow cabbages near tomatoes, you might end up with reduced yields from both.

Although some varieties of tomatoes can grow to be very large, up to nine or 10 feet, some varieties have a much smaller growth habit. If you are growing a tomato plant in a container, it’s a good idea to keep your eye out for plants that have a small growth habit.

We are just beginning to scratch the surface when it comes to growing tomatoes in your garden. Luckily, we have a lot of articles on the topic, covering everything from planting tomatoes to choosing the best fertilizer for them. You can find all our articles in the sidebar.

If you aren’t sure where to start when it comes to growing tomatoes, our article on how to plant tomatoes can point you in the right direction. You’ll learn more about starting tomatoes from seed, planting them in the ground or a container, and what tomatoes need to grow well and to produce lots and lots of fruit.

Once you’ve got your tomatoes started, you will most likely want more in-depth information about caring for them and helping them thrive. Check out our articles How to Stake Tomatoes, Your Guide to Growing Tomatoes in Containers, and Watering Tomatoes: How Much Water Do They Need? for more detailed advice on the ins and outs of successfully growing tomatoes.