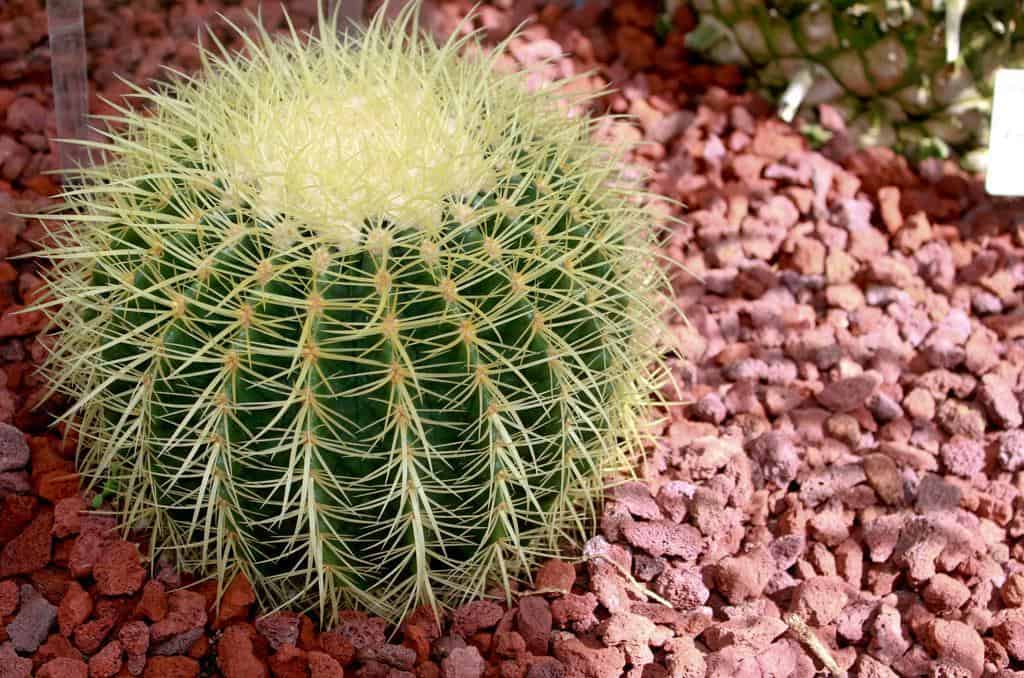 While the golden barrel cactus is rare in the wild, it can commonly be found in homes and gardens across America. Its unique, spherical appearance makes it a striking ornamental accent for xeriscapes such as desert landscapes and rock gardens. With proper care and attention, the golden barrel cactus can reach up to three feet in both height and diameter and may also produce flowers. Even in areas that are prone to drought, this plant offers an attractive, eco-friendly and all-natural decor solution for your garden.

A Brief Overview of the Golden Barrel Cactus

Echinocactus grusonii, more commonly known as the golden barrel cactus, is a popular ornamental plant due both to its hardy nature and exotic appearance. It’s spherical shape and coating of golden spines make it look somewhat like a pincushion, earning the cactus the amusing nickname of “mother-in-law’s cushion.”

Golden barrel cacti have been a popular addition to gardens across Europe and North America since the late 1800s. The widespread demand for the cactus resulted in it being dug up by the thousands, and nowadays, the golden barrel cactus is rarely found in the wild. The Rio Moctezuma Valley in Mexico is the site of an intensive conservation effort to reestablish the region’s native golden barrel cactus population, but wild plants are not found in many other areas.

Luckily, the plant is in no danger of disappearing. Its popularity as a decorative garden accent ensures that this cactus will continue to thrive in homes, nurseries and botanical gardens around the globe.

How to Grow a Golden Barrel Cactus

These plants grow best outdoors, but with enough light, it’s possible to grow a potted golden barrel cactus in your home as well. You can grow the plant from seed, or purchase a mature cactus from a nursery.

>> Get your own golden barrel cactus on Amazon <<

To grow a golden barrel cactus from seed, you need to make sure that you provide the proper conditions for germination. Seeds need a warm, moist environment and plenty of light before they will sprout. Plant the seedlings in a mixture of half peat, half perlite and cover the pot with plastic wrap before placing in bright, indirect light. You should keep the soil damp as the seedling grows, but be careful not to overwater.

With proper care, you should see seedlings start to sprout within four to six weeks. Once the seeds have germinated, you can gradually remove their plastic covering and allow your plants to grow. When the young cacti begin to crowd one another, you should transfer small groups of between four to six plants to separate two-inch pots. Eventually, you’ll have to give each individual sprout its own pot. You can learn more about growing golden barrel cacti seedlings from our friends at AzFlora ENG.

Once your young golden barrel cactus is about six inches in diameter, it’s mature enough to handle outdoor conditions. You can plant your cactus in a relatively shallow hole after loosening the roots. Water well during the first month following planting, then settle into a more conservative irrigation routine. If you live in an area with regular rainfall, your plant may require little to no irrigation on your part. Gardener lucky55416 goes over how to plant a golden barrel cactus in your garden in her helpful tutorial.

The main drawback to growing a golden barrel cactus indoors is that it is less likely to produce flowers than a plant that is grown outside. If your plant does flower, you can expect to see yellow, funnel-shaped blossoms appear along the crown of the plant around mid-summer. When fertilized, these flowers produce fleshy yellow fruit bearing seeds that remain viable for years at a time.

How to care for a Golden Barrel Cactus

As a species that’s native to arid desert regions, the golden barrel cactus is incredibly robust and relatively drought resistant. While you don’t need to put a lot of time and effort into looking after these plants, there are still a few simple care tips that you can follow to keep your golden barrel cactus looking healthy year after year.

The golden barrel cactus is a prickly plant, so be careful to exercise proper precautions when handling and providing care. It’s a good idea to wear thick gloves to protect yourself from any accidental injuries.

Golden barrel cacti can make a great addition to any garden, particularly xeriscape designs. If you’re thinking about including golden barrel cacti in your landscape design, the first thing that you have to consider is whether or not you live in a climate that will support healthy growth. This variety of cactus doesn’t function well in extreme climates or in areas that experience heavy rainfall throughout the year. Dry landscapes are the best terrain for growing golden barrel cacti.

This plant’s unique, spherical shape makes it an ideal focal point for any garden. If your land is relatively flat, you can add the illusion of rolling hills by adding clusters of golden barrel cacti to your yard. This cactus is also popular in contemporary landscape design, as it adds curves that contrast the sharp angles often found in modern architecture.