There’s nothing more frustrating than spending endless amounts of time and effort trying to create and maintain a perfectly groomed lawn only for it to be ruined by the presence of weeds.

More often than not, these common weeds can blend into your lawn, making the task of identifying and removing them all the more difficult.

Therefore, in this guide, we’ll take a closer look at some of the common weeds that share many of the same visual characteristics as grass, and discuss the most effective methods of getting rid of them. 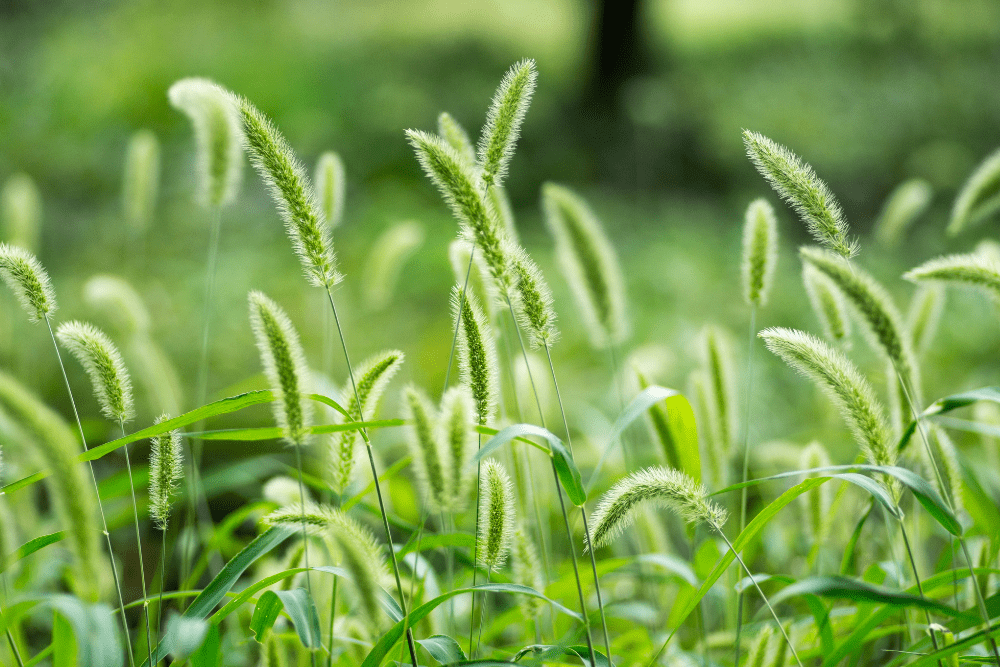 The first common weed we’ll examine in greater detail is the green foxtail. This weed gets its name from the unique appearance of the heads that grow on their stalks, as they look very much like fuzzy foxtails!

However, don’t be fooled by the cute-sounding name as they’re an incredibly invasive species that can be problematic for lawn owners and farmers everywhere.

The typical green foxtail can grow anywhere from 10cm to around 100cm tall, and they’re most commonly found in meadows and prairies. What’s more, they contain hundreds of seeds per foxtail plume that can spread easily – particularly in windy conditions.

Despite the fact that these lawn weeds are extremely hardy once fully established, it’s surprising to learn that green foxtail is pretty picky when it comes to germination.

Moist soil provides the ideal conditions for their growth, but they can easily be crowded out by densely populated lawns and fields.

In terms of temperature, green foxtail is best-suited to warmer soil in the region of 15℃ to 35℃, which equates to between 59℉ and 95℉. The weed can germinate at any point in the season, so long as the conditions are favorable.

As is the case with the vast majority of lawn weeds, green foxtail can be controlled to a certain extent with some herbicidal solutions.

However, if you really want to prevent the invasive species, the most effective method is to crowd it out with a thick and healthy lawn. 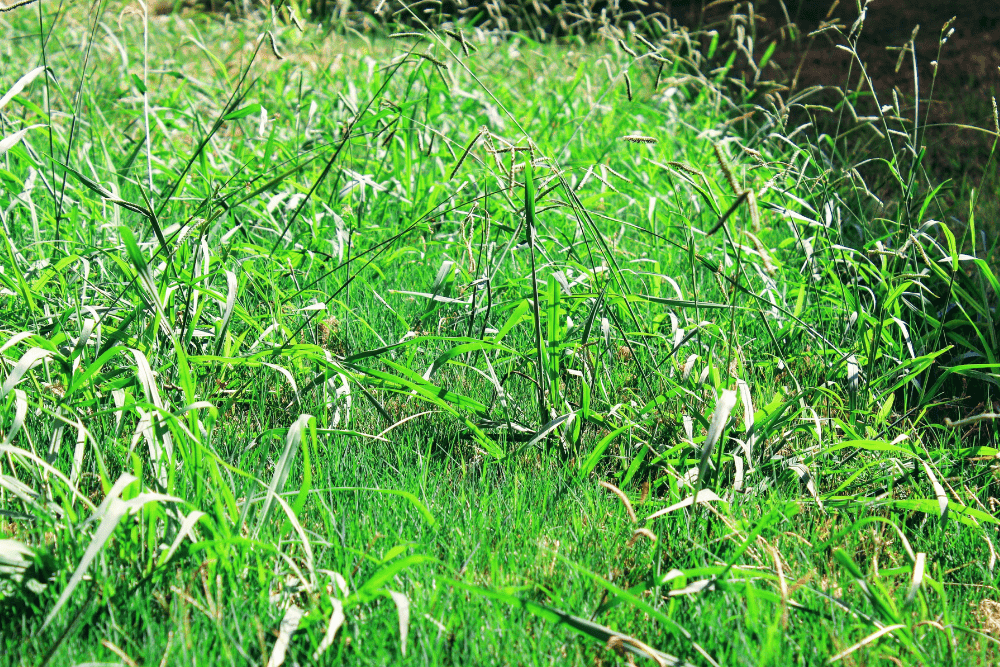 Crabgrass, which is commonly also known as “finger grasses”, is an invasive weed that often sprouts in small patches throughout lawns and meadows.

It’ll have a much rougher texture to the rest of your lawn, but fortunately it’s only an annual plant, meaning it’ll die after a season.

While this is certainly a good thing, crabgrass has the potential to spread incredibly quickly due to its lateral growth and thick blades.

With this in mind, there’s every chance that it can do permanent damage to your lawn if it’s able to smother and crowd out the surrounding grass.

This is why it’s essential to be eagle-eyed and act straight away if you spot any crabgrass growing in your lawn. The most effective method is to stop the weed before germination using a pre-emergent herbicide.

If you’re unable to do this, you’re best off getting rid of it by simply pulling it or using a direct herbicide.

The good news is that crabgrass isn’t a perennial weed, so you won’t have to worry about it continually recurring. Furthermore, it should be relatively straightforward to get rid of with a fair amount of persistence. 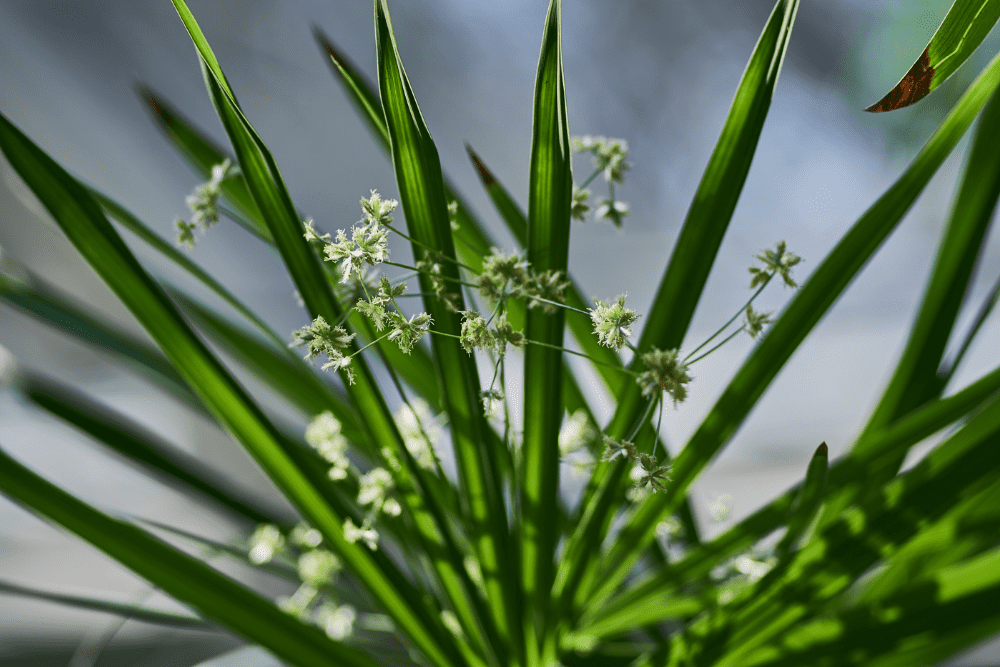 The next common weed on our list is nutsedge, which can look extremely similar to tall grass before it matures and blooms.

Unfortunately, unlike crabgrass, nutsedge is a perennial weed. This means that it’s incredibly invasive, as well as considerably more difficult to get under control due to some hardy root systems.

Moreover, nutsedge can easily spread throughout your lawn (or from another nearby lawn) by both airborne seeds and underground rhizomes. Therefore, it’ll keep coming back year after year unless you manage to get it under control.

The most important thing to keep in mind when attempting to remove nutsedge is to avoid pulling it. This is because you risk leaving behind rhizomes that in all likelihood will end up sprouting.

Instead, one of the best ways to prevent the growth and spread of nutsedge is to grow a thick lawn that’ll smother and crowd out any nutsedge that threatens to develop.

If, however, you already have a considerable amount of nutsedge in your lawn or on your land, there are specific herbicides you can use to eliminate the invasive weed.

All you need to do is apply the right herbicide to the base of nutsedge, and this should kill the entire plant – including all of its underground components. 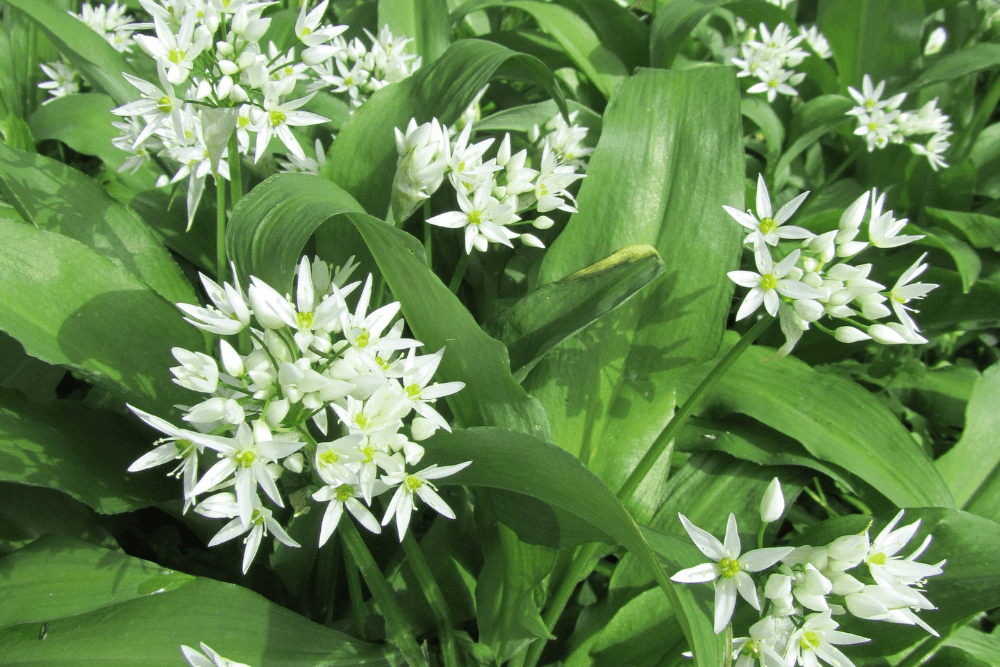 While wild garlic and wild onion might appear to be some kind of tall grass at first glance, the fragrant scent of these grass-like weeds is pretty distinctive once you get closer to investigate.

With this in mind, if it smells like you’ve just stepped out of the kitchen after moving your lawn, there’s every chance that you’ve got some wild onion or garlic hiding in there somewhere.

The good thing is they shouldn’t be too difficult to identify as both wild garlic and wild onion tend to grow clumps. What’s more, they also grow significantly quicker than regular grass, so they’ll noticeably surpass the height of the rest of your lawn.

Fortunately, these aromatic weeds become dormant throughout the summer months. Therefore, they’ll only be a problem during growth in early spring and late fall.

To remove them effectively, you could simply dig them up. Many people like to transfer their wild garlic and wild onion to a herb garden or an enclosed pot.

If you decide to use this method, just make sure that you dig up the bulb and all the underground components of the weed, otherwise they’ll quickly grow back.

An alternative method is to go down the herbicide route. This works just as efficiently, so long as you check the label of the herbicide to make sure that it treats wild onion and wild garlic. 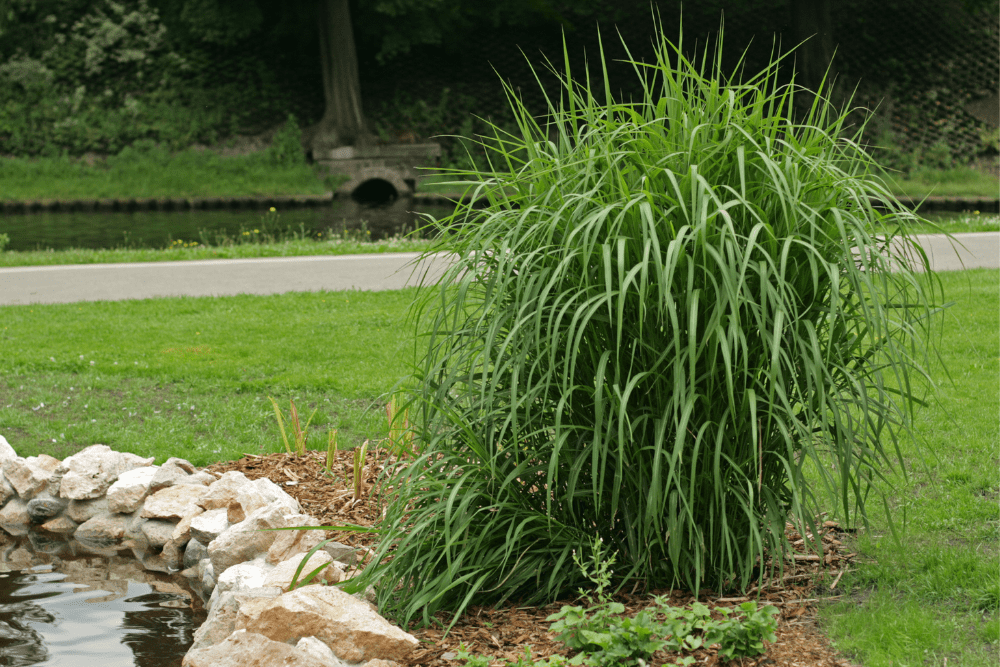 This next common weed is sometimes known as “quackgrass”, and is another invasive grass-like species that can cultivate quickly in your lawn via rhizomes.

Moreover, the common couch weed can also spread through airborne seeds, which enables it to travel across longer distances and settle in several nearby lawns.

In terms of prevention, it’s difficult to pull it out of the ground in its entirety due to the fact that it has a complex and fibrous root system. Therefore, the best method, similar to many of the other common weeds on this list, is to crowd it out with a thick and healthy lawn. 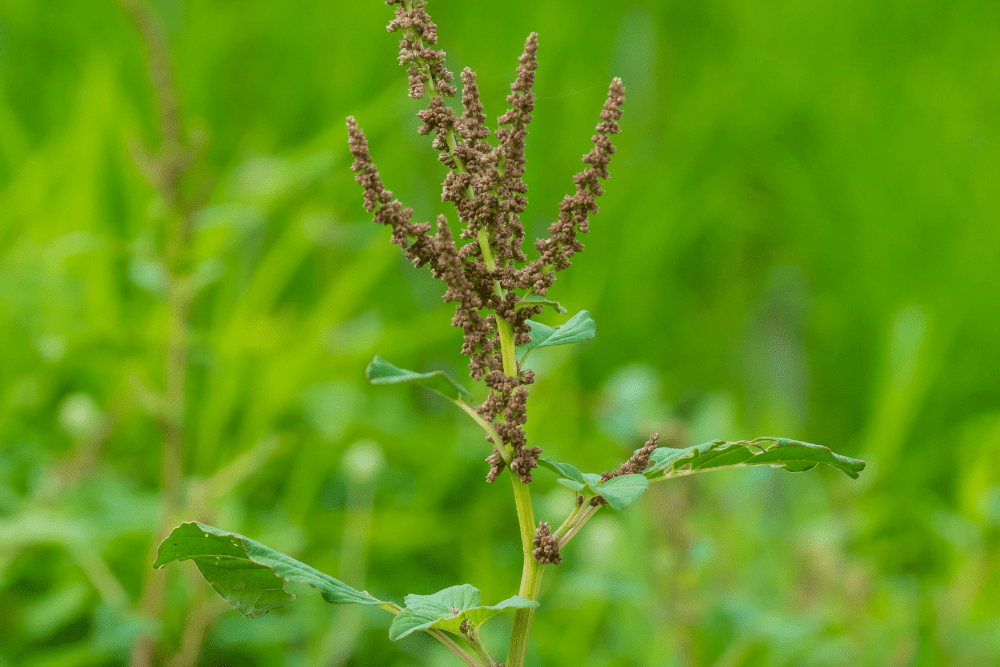 Slender rush is a perennial weed that grows in clumps, similar to crabgrass, wild onion, and wild garlic. Not only is this weed propagated by above-ground seeds, it’s also developed through underground tubers which form part of the species’ root system.

This makes it an incredibly difficult task to get the invasive weed under control in your lawn, because even if you can’t necessarily see it, there’s every chance that it’s still present.

Herbicides aren’t the most effective when it comes to preventing slender rush, so manual weed management is probably the best way forward. This usually involves pulling the weeds out by hand, so make sure you get the full root system as well.

Another preventative method which can sometimes prove effective is a strict mowing routine that doesn’t give the weed time to mature and spread its seeds above the ground. 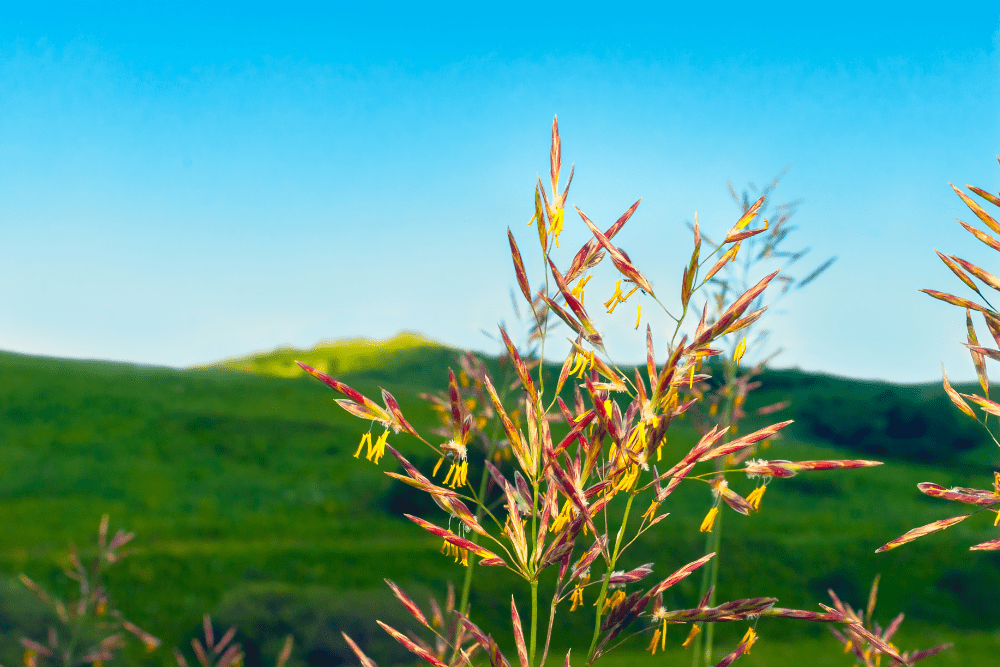 This common weed is another hardy perennial that’s highly adaptable and can grow in all types of conditions.

Smooth bromegrass is one of the most invasive species for a lawn due to the fact that it can grow rhizomes below ground, which is particularly worrying if you have a thin lawn.

Despite its often disruptive effect, it’s worth noting that bromegrass can serve an important purpose as hay and grazing fields for livestock. Furthermore, its strong root system can also help to prevent soil erosion.

Nevertheless, the vast majority of homeowners don’t want it in their lawn, so the best way to control and prevent the grass-like weed is to mow it down to a low level, and attempt to crowd it out with a healthy, thick lawn canopy.

If worse comes to worst and this doesn’t do the trick, you can instead opt for a suitable herbicide and apply it directly to the weed. 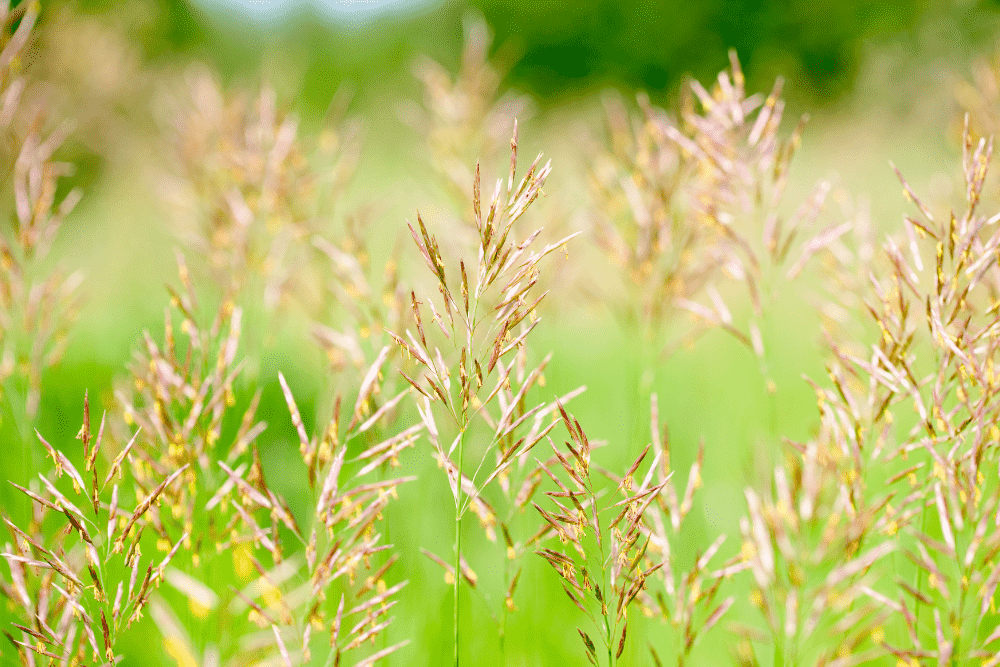 The final weed on our list that looks similar to grass is tall fescue. While it isn’t necessarily a common weed in the same sense as the others on this list, it’s an invasive species that shares many of the same characteristics as a weed.

Similar to species like nutsedge and bromegrass discussed above, tall fescue can propagate through underground rhizomes. It’s also highly drought resistant, so can cope with a wide range of adverse weather conditions.

The most effective method of getting rid of tall fescue is to solarize it. This involves covering up large patches of grass to deprive them of any sunlight and increase the heat under the covering to kill everything that’s underneath.

Large crabgrass is typically a pale green color and covered in coarse hairs. They’re particularly predominant in moist soil and often form clumps with complex, but shallow roots. The seedlings of large crabgrass are similar to those of witchgrass, however they’re covered in slightly shorter hairs.

What Is MSM Weed Killer?

This weed killer is one of the very best when it comes to eliminating perennial and annual weeds. It’s a professional grade post-emergent herbicide that’s formulated with the highly efficient, active ingredient, 60% metsulfuron-methyl.

MSM weed killer works by inhibiting cell division, which in turn, prevents the growth of weeds.

Is Nutsedge A Broadleaf Weed?

No, nutsedge isn’t a broadleaf weed, nor is it a grassy weed, it’s part of the sedge family. Nutsedge will typically exhibit a triangle stem and is comfortably felt when you twirl one of its stems between your thumb and forefinger.

If grazed, the shoots of rushes are believed to cause poisoning in sheep and cattle. Furthermore, cattle that acquire a taste for the grass-like weed, may subsequently suffer blindness, and in some cases, even death.

What Kind Of Grass Do Golf Courses Use? 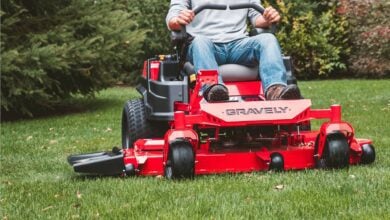 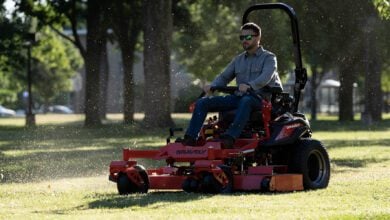 How to Find the Best Price on Gravely Zero Turn Mowers? 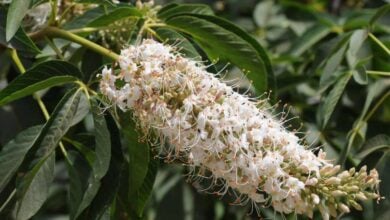 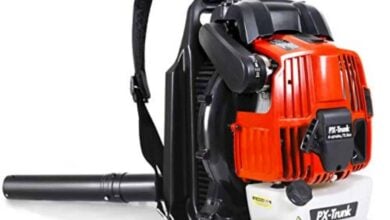