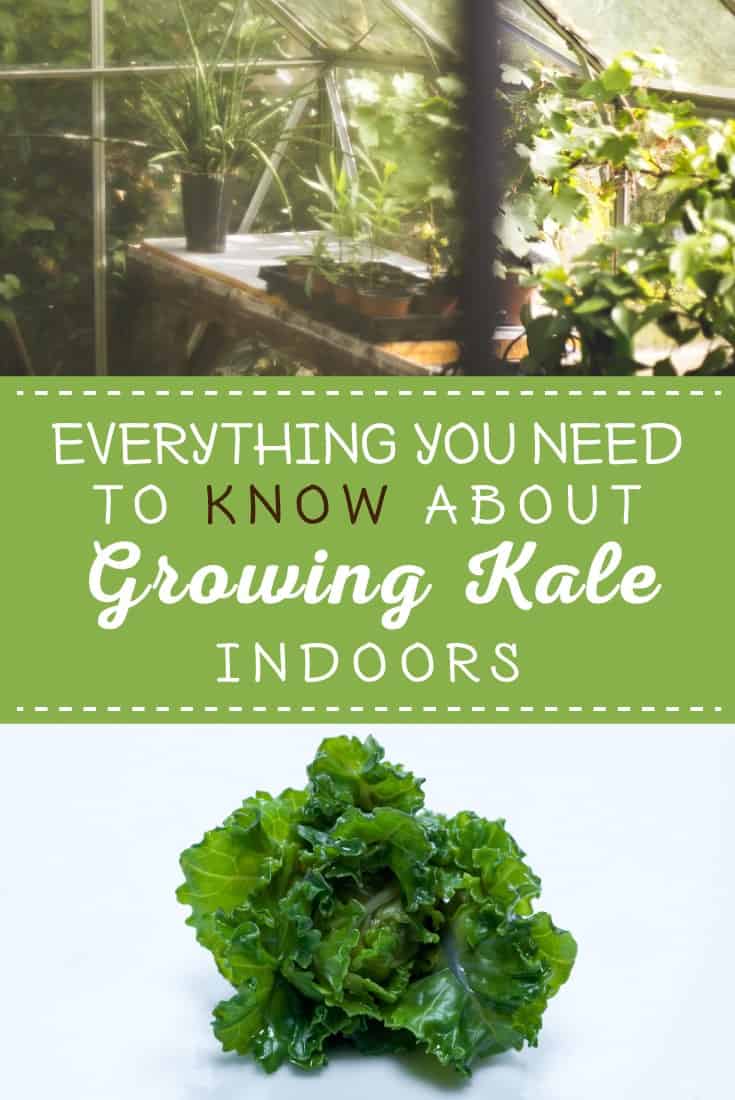 Growing kale indoors is relatively simple, provided you have the right equipment. Kale will need up to eight hours of light each day, which you can give it by putting the plant in a south-facing window or under an artificial light source. Kale grown indoors also needs enough nutrition, which it can get from container soil, and water, which you’ll need to give it by watering regularly. When grown for micro greens, kale is ready in just a few weeks. If you’re growing full-size kale, the process can take about two months.

Whether you simply don’t have the space to garden outside or want to grow your own vegetables throughout a cold winter, gardening indoors allows you to do that.

Along with other leafy greens, kale can be an ideal vegetable to grow inside. Although it will require a fair amount of light, it won’t need much space. Growing kale indoors also helps cut down on the risk for pests and even certain diseases.

As long as you start with clean seeds or transplants and use sterile potting mix, the kale will be free from aphids, cabbage worms and other insect pests. You can also reduce the risk for disease by giving your kale plenty of space and by avoiding overwatering.

While you can technically grow any type of kale indoors, choosing a dwarf variety can be ideal. Some types of kale can grow up to three feet tall or can spread more than two feet wide. That size can be a bit overwhelming.

Dwarf varieties, such as Dwarf Blue Curled, usually grow to no more than a foot tall and about a foot wide. If space is an issue, picking a type of kale that won’t grow very large will save you a considerable amount of stress.

Some homes are better setup for growing vegetables like kale indoors than others. Kale needs up to eight hours of sunlight per day. Depending on the layout of your home, it might be difficult to find a spot for the kale that will give it the amount of natural light it needs to thrive.

According to Inhabitat, the windowsill of a south-facing window is often the ideal spot for growing vegetables indoors, especially during the winter. If your home doesn’t have a window that faces south or if it doesn’t get much natural light at all, you’ll want to choose a location for the kale under an artificial source of light.

The video above from The Wisconsin Vegetable Gardener walks you through the process of setting up a grow area in your home. The video shows you a type of light to use to provide your plants with an adequate amount of sunlight and tips on choosing the types of bulbs to use.

If you’re using artificial light to grow kale indoors, don’t leave the lights burning 24 hours a day. Not only will doing that leave you with a high electric bill, it will also give the plants too much light. One way to give them enough, but not too much light, is to turn the lights on in the morning before you go to work. Turn the lights off again once you return home in the evening.

Kale doesn’t only need light to grow indoors. It also needs an adequate amount of space, food and water. The temperature also needs to be set in the right range.

Remember that kale is a cool-loving vegetable. It often tastes better after it’s been exposed to a frost or two. While you don’t want to give up heating your home in pursuit of tastier kale, it’s important to make sure your indoor temperatures aren’t too hot.

According to Harvest to Table, winter crops like kale do best with daytime temperatures between 60 and 65 degrees Fahrenheit and with nighttime temperatures around 50 degrees. One way to mimic that in your home is to keep the plants on a windowsill. Another option is to grow them under light in the basement.

If you don’t have a basement and your windows don’t get enough light, you can grow kale at room temperature. Just try to keep your home under 70 degrees Fahrenheit as much as possible.

Choose a container for kale that has holes in the bottom for drainage and that’s big enough to let the kale grow with ease. You’ll want a container that’s at least six inches in diameter, although a larger eight or 12 inch pot can be a better option.

Use a potting mix made for growing vegetables when you plant the kale. You don’t to use garden soil, since it will clump up in a container, making it difficult for the pot to drain. It might also have diseases and will likely not have the nutrition your kale needs.

Keep the kale watered, so that the soil doesn’t ever dry out fully. If you’re concerned that your kale isn’t getting enough nutrition from the soil, you can water with a tea made by steeping seaweed and fish emulsion every few weeks, according to the Old Farmer’s Almanac.

Microgreens, including micro kale, can be pretty pricey to purchase at the farmer’s market or grocery store. But they are pretty cheap and easy to grow indoors. If your indoor growing space is very limited, your best option might be to grow micro kale instead of full-sized kale.

You’ll need a shallow, wide container to grow the sprouts. You can use a special growing tray or recycle a clean, plastic package, such as the small box pre-washed salads are often sold in.

Fill the tray or package with a few inches of potting mix, then dampen the mix with water. Sprinkle a thick layer of kale seeds over top, then cover with about a half inch of potting soil. Wet the soil after the seeds are planted.