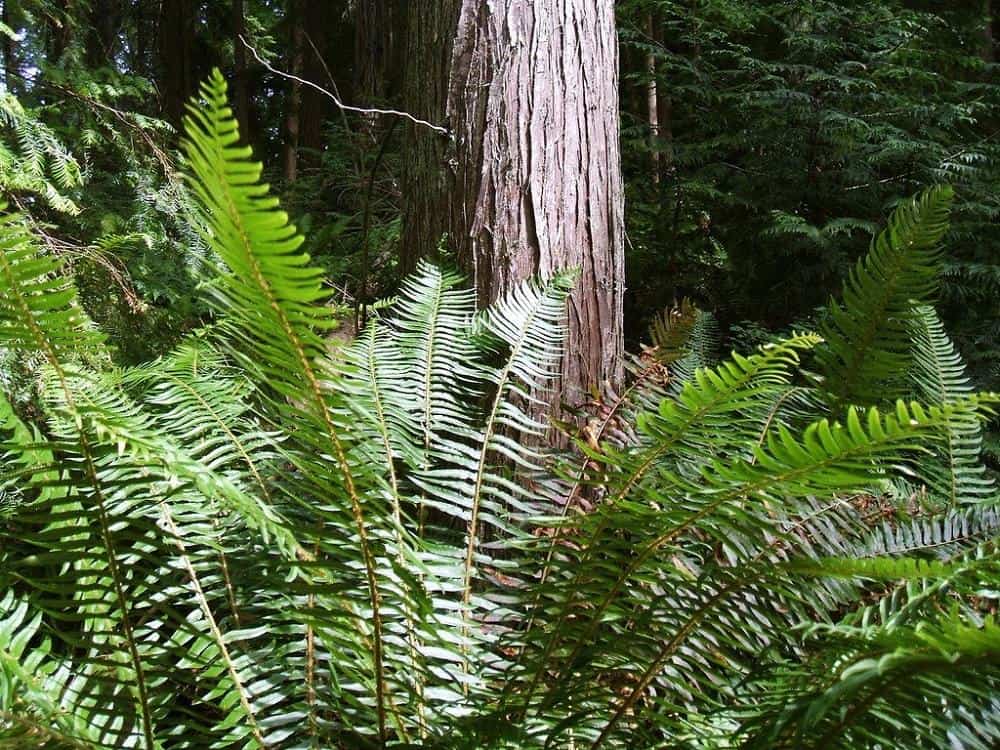 With lacy, pointed fronds that grow up to four feet high and eight feet wide, the Sword Fern offers appealing filler for large gardens. Its medium to dark green tufts fit in with any combination of backyard foliage and flowers.

Polystichum Munitum, commonly referred to as a Sword fern or Western Sword Fern, blooms in wooded areas along the western coast of the US, Mexico, and British Columbia. It’s also found inland in Montana, Idaho and the Dakotas. This versatile plant thrives in humid, mild climates.

Sweeping ornamental Sword ferns are found naturally in wooded areas in the Western U.S., but are also popular as houseplants. Their upright fronds contain thin green leaves with sawtooth-leaflets. The frond’s underside holds sori ( a cluster of spore-containing structures) which produce yellow spores.

In the garden, Sword ferns offer lots of shade under trees. Easy to maintain indoors, smaller Sword ferns in a hanging basket add an exotic charm to bathrooms or living rooms in a hanging basket. The Sword Fern isn’t picky about weather, sun, or soil. It can grow in just about any environment. A member of the low maintenance evergreen family, the Sword Fern adds form and texture to your garden.

Boston ferns (Nephrolepis exaltata) are sometimes referred to as Western ferns. There’s not a big difference between the appearance or maintenance needs of either fern, although they’re found in different parts of the country. Nephrolepis exaltata grows naturally in Florida and throughout Central America, South America, and Mexico. Like the Western fern, it may appear dead in the winter due to frost.

When Sword ferns get older, they form trunks, similar to a tree trunk. In this video “Western Sword Fern with a Trunk” from the Jungle Joe C YouTube Video Channel, you can see a close-up of an older Sword fern in the wild and its trunk.

After a long winter, it might be difficult to determine if a Sword fern’s still alive due to the frost, but in most cases the fern’s just hibernating. In the spring (usually in March), cut the plant down to the ground to release the old fronds. Trimming the plant also protects yet to emerge fronds, allowing them to unfurl faster at the beginning of each season. While there’s some debate as to the effectiveness of this method, some people swear by it.

When fully grown, Sword ferns require little water, and you can even get away without watering them at all. According to horticulturist Linda McMahan of OSU Extension, the Sword fern has thick foliage to help control weeds, and its fibrous root system helps control erosion when planted on a slope to control the natural habitat.

Sword ferns can grow well in acidic soil (pH 5.6 to 6.0), but do better with a mildly acidic soil pH of 6.1 to 6.5, for both indoor and outdoor planting. Soil should be well-drained, with an organic topsoil of humus and small stones to mimic the fern’s natural growing conditions. Add organic matter to sandy or clay soil before planting a Sword fern.

Propagate a Sword fern from rhizomes (the stemlike structure in the middle of the plant). You’ll need to take a rhizome from an existing Sword Fern in the fall, or in the spring just as plants begin to grow again, to birth a new fern.

You can also propagate new Sword ferns from spores. Collect spores in July and August by shaking a few fronds in a paper bag to release spores from the fronds’ underside. Sprinkle the collected spores on slightly moist peat moss. Cove the moss with plastic and put in a shady location with a temperature of 59 to 86 degrees Fahrenheit. Keep the peat moss from drying out or becoming too wet, and wipe away any condensation.

After a few weeks, the peat develops small discs called gametophytes. Keep them moist, and a few weeks later, fronds will appear. Transplant the fronds to individual containers, but be careful, as Sword ferns propagated this way tend to be fragile when they’re young. (source)

Douglas C. Welch of A Gardener’s Notebook demonstrates how to plant Sword Ferns in your garden on “In the Garden – Planting Sword Ferns from Friends” from the Douglas Welch YouTube Channel

Using disinfected pruning tools, cut dead or damaged fronds. Use an angled cut to clean up dead leaves, chopping off at the point latch onto the brown stem in the center of the plant. The lower outer fronds wilted make way for new fronds growing from the middle of the plant.

Regular pruning isn’t necessary if you leave enough space between western ferns and other plants in your garden to allow free growth. For Boston ferns, allow two to three feet, Western Ferns one-and-and a half to two feet, between plants.

Since ferns are native to the tropics and naturally grow in high humidity, a hanging Sword fern is a perfect addition to your bathroom. The moisture from showers and sinks keep them hydrated. Want to adorn your shelf with a potted fern? For ferns on a tabletop or shelf, maintain moisture by setting the container on wet pebbles. (Avoid placing the plant directly in water.) The evaporating water will provide humidity ferns crave. If you have a humidifier, place the plant on or near the room. The humidifier keeps plant healthy, and the plant will purify the air.

Give your Sword fern enough space for its fronds to unfurl without getting in the way of furniture or other plants. Occasionally rotate the plant to ensure proper symmetry. If any long, imperfectly formed fronds appear, prune them. If allowed to stay, they may take control of the plant.

In the winter, use a mister to retain humidity. Boston ferns are particularly susceptible to dry indoor winters. There’s little chance of disease or pests with an indoor Sword fern. Hand pick the occasional mite or mealy bug off the plant or spray ferns with water.