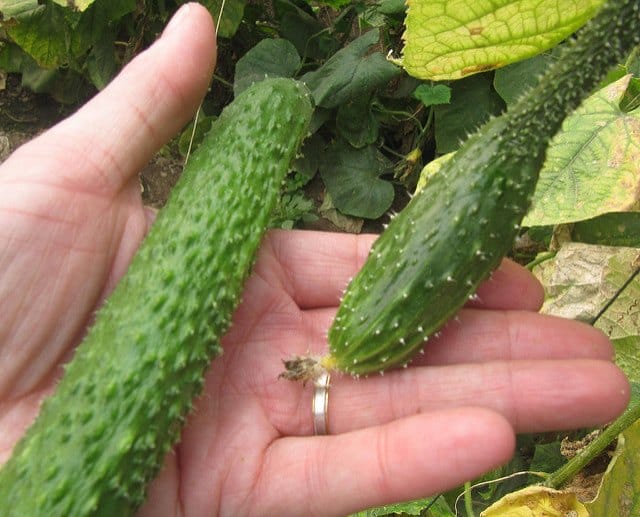 grow your own cucumbers

Cucumbers grow very fast. From seedling to harvest you can expect to have a hearty supply of cucumbers in just a couple of months. Around the 50th day after planting, start checking your cucumber plants for signs of approaching maturity.

Gently squeeze your cucumbers. Cucumbers that are ready to pick will be firm to the touch. You’ll also want to examine a few of them to make sure that they are uniformly green, which is another indicator of ripeness.

Photo by Klariti Template Shop licensed under CC BY 2.0.

If you’re still not sure if your cucumbers are ready to pick, slice one open and give it a taste. It should be crisp with soft seeds. The area around the seeds should have a jelly-like consistency.

If your cucumbers have turned yellow, they are past their prime and will probably taste bitter.

Specific Signs that Cucumbers are Ready to Harvest

You will get the freshest cucumbers when you pick them before slightly before they reach maturity. While it can be hard for a novice gardener to know exactly when that is, there are some benchmarks and visual signs that will tell you when the time is right, until you have more gardening experience.

Cucumbers will be ready to pick about 8-10 days after the first female flowers open. Another timeframe that you should consider is the time from the initial planting. This varies between cucumber varieties, but it should be between 50-70 days.

Another benchmark to look for is size. Pickling cucumbers are usually about 2 inches long, but some varieties can be up to 6 inches. Slicing pickles will be 8 inches or longer when they are ripe for picking, depending upon the variety. In addition to the length, take a look at the girth. Cucumbers that are ripe for picking should be about 1 ½ inches in diameter.

VeggieGardener.com says that another sign to look for is whether the vines are steadily growing up the trellis.

Horticulturist, Melinda Myers, says that if cucumbers are misshapen, your plants may need more water, plant food, or sun.

Here’s another great video about when to harvest cucumbers. ​

How to Pick Cucumbers

During peak season, check your plants every day. Most likely you will have at least a few cucumbers to harvest. The more you pick, the more the plant will produce. Gardner and writer, Bonnie Grant, from Gardening Know How, says that it’s best to check your plants and pick cucumbers in the morning when the vines are cool.

During off-peak season, harvest your cucumbers every other day to be sure they are not getting too large or too mature.

Every fruit may not grow to maturity. Assess your plants for cucumbers that are stunted, not growing or that have rotten ends. Pick and discard cucumbers that are yellow and past their prime. This will leave more nutrition for the healthy plants.

Don’t twist and pull the vine when pulling the cucumbers off the vine. Use garden shears or pruners and cut the stems about ¼ inch above the fruit. Hold the cucumber in your other hand so that it doesn’t drop to the ground and get bruised. Twisting and pulling vines may damage them and reduce your yield.

Certain types of cucumbers, like burpless cucumbers and English cucumbers have a thinner skin, making them more susceptible to bruising. Take a basket out to your plants and lay softer cucumber varieties gently in the basket.

If you plant lemon cucumbers, it can be a bit more difficult to tell when they are ripe. They earned their name because, well, they look kind of like lemons. Bonnie Plants recommends picking lemon cucumbers just before they begin turning yellow. If you wait until they turn yellow all over, the cuke becomes overly seedy and doesn’t taste as good.

As colder weather sets in, about a month before you expect any frost, pinch off any remaining blossoms. The rest of the plants will mature more quickly and you’ll get the most from your crop.

Here’s a super quick video showing exactly how to do it.​

Storing Cucumbers Until You are Ready to Eat Them

If you’ve noticed that the cucumbers that you buy in the grocery store feel waxy, that’s because commercial growers coat them with wax to prevent moisture loss and maintain freshness longer.

Unlike many other fruits and vegetables, cucumbers will not continue to ripen after you pick them.

Pickling cucumbers tend to stay fresher longer than slicing cucumbers. You don’t need to refrigerate them, unless you want to. Store picklers in a cool, dark place for as long as five days before pickling them.

Cucumbers will always freshest when you eat them as soon as possible after picking. You can store most cucumbers in the refrigerator crisper bin for up to three days. Place them in loose plastic, or perforated bags. Don’t stack them on top of one another or place other vegetables on top of them to avoid unnecessary bruising.

Another way to store cucumbers in the refrigerator is to use paper towels to wrap each cuke separately and toss them in a bag. Then, put it into the refrigerator crisper bin. Some gardeners swear that this method works that best and that it keeps cucumbers fresh for up to a week.

Watch this video by Cooking Light to learn more about how to store cucumbers so they stay fresh longer.

Photo by Klariti Template Shop licensed under CC BY 2.0.