A low-maintenance houseplant that originated in the American tropics, the Lantana camara likes lots of direct sun and needs little watering once it matures. It comes in a variety of gorgeous colors, including people, orange, and some multi-colored varieties. The Lantana livens up hanging baskets and container gardens and can be used as a foundation or edge in outdoor gardens. It thrives in well-drained soil, but too much water can damage it. Also called the Spanish Flag or Wild Sage, this plant is famous for attracting butterflies.

What You Should Know About Lantana Plants

A flowering shrub that grows to about four feet tall in the wild, the Lantana plant can be tamed to about 16 inches high domestically by pruning. The plants, usually sold by stores and nurseries in early spring or late winter, are thought by many growers to be disposable plants. This isn’t true, as most Lantana camara plants can be kept for years if properly cared for and pruned.

This plant tolerates salty water, drought, high winds and blazing winds. Shade and over watering are its enemies. Its blooms have a strong, pleasant smell, and it purifies household air.

One of the most popular plants for attracting butterflies, research at Auburn University showed that, although all varieties can draw these beautiful winged creatures, the “New Gold” and “Radiation” varieties attracted the most butterflies.

Lantana flowers tolerate many soil types but grow best in slightly acidic soils. If you live in an area with alkaline soil, add pine needle mulch to raise pH levels

These plants don’t require fertilizer to grow, but you can use a diluted, store-bought liquid brand once in the spring. Using too much fertilizer inhibits growth.

New lantana plantrequires frequent watering to keep potting mixture moist. Avoid leaving new plants in standing water. Once the plant matures, a thorough drink once a week should suffice.During the winter, water enough to keep the soil from turning dry.

Grow your plant in bright sunlight for between three and six hours a day. It can even soak up the sun for up to eight hours with no problems. Too much shade will stop the Lantana from blooming.

Grow new Lantanas from seeds or cuttings, whichever you prefer. To grow from seeds, you’ll need to harvest the small black berries of the plant once they’re ripe. Take out the seeds, clean them, and let them dry for a few days. Store the seeds in a sealed container in your fridge until you’re ready to plant them.

Soak the seeds in warm water for 24 hours before planting them. Fill small pots with peat moss, perlite or another soil-less seed potting medium, leaving a half-inch to spare at the top. Place one or two seeds in the middle of the pot and cover with a thin layer of potting medium. Keep the soil moist to ensure fast growth. You may want to place the pots in a sealed plastic bag to retain moisture. It should take abut a month for the plans to bloom.

Propagate from cuttings by trimming four-inch tips from the stems and remove the lower leaves. Prepare a 50/50 mixture of peat moss and perlite. Water the soil-less medium, and then make a two-inch deep hole in the middle of the pot with a pencil.

Cover the last two inches of the stem with rooting hormone. Put the cutting in the hole, packing around it with a thin layer of soil. Once the cutting stands upright, place three or four craft sticks in the soil near the pot’s edge. Place the pot in a sealed plastic bag. Check the cutting occasionally for new growth. Rooting occurs after three or four weeks. Take the bag off the newly rooted cutting and place it in a sunny location until you can plant it outdoors.

Plant Lantanas outdoors once frost and cold temperatures have passed. They do prefer warmer temperatures, so if your region experiences a cooler than average spring, the plants may be slow to flower. When temperatures rise, the plants will grow at a brisk pace.

You may have to repot Lantana plants two or three times a year. Transfer plants to a pot that’s one size larger when the original pot becomes root bound. Avoid using large pots to transfer these plants, as they do better in slightly smaller containers. A six to eight-inch pot should be large enough for an average indoor Lantana. To repot, use a soil-based potting mixture.

Here are a few problems you may encounter with a slow-growing plant, and how you can solve them and get your flowers to bloom.

Check plants for black or brown patches. These spots indicate mold or mildew caused by shade or over watering. Remedy this by trimming infected leaves and disposing them to get rid of the fungus.

The Lantana camara may be toxic to dogs and cats. In tropical climates, like Hawaii, where the plant isn’t subdued by winter frosts, it’s classified as an invasive weed.

Wrap Your Mind Around Our Sansevieria (Snake Plant) Care Tips

Your Next Great Houseplant is the Cordyline 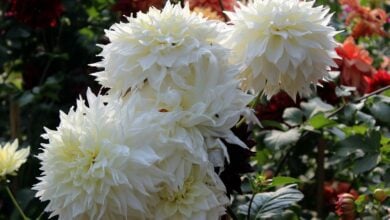 How To Grow And Care For A Champa Flower? 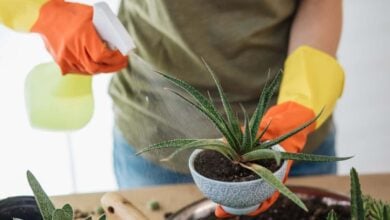