The cinder block has long been known as critical piece of masonry that’s invaluable in the construction of buildings and other such structures. Yet a funny thing has happened to this cold, impersonal-looking hunk of concrete. It’s been allowed to live a dual life as an essential component to a garden, as its combination of weight, sturdiness, and design makes it versatile enough to be the backbone of some rather innovative concepts. Here’s a look at some of the most progressive ideas out there. 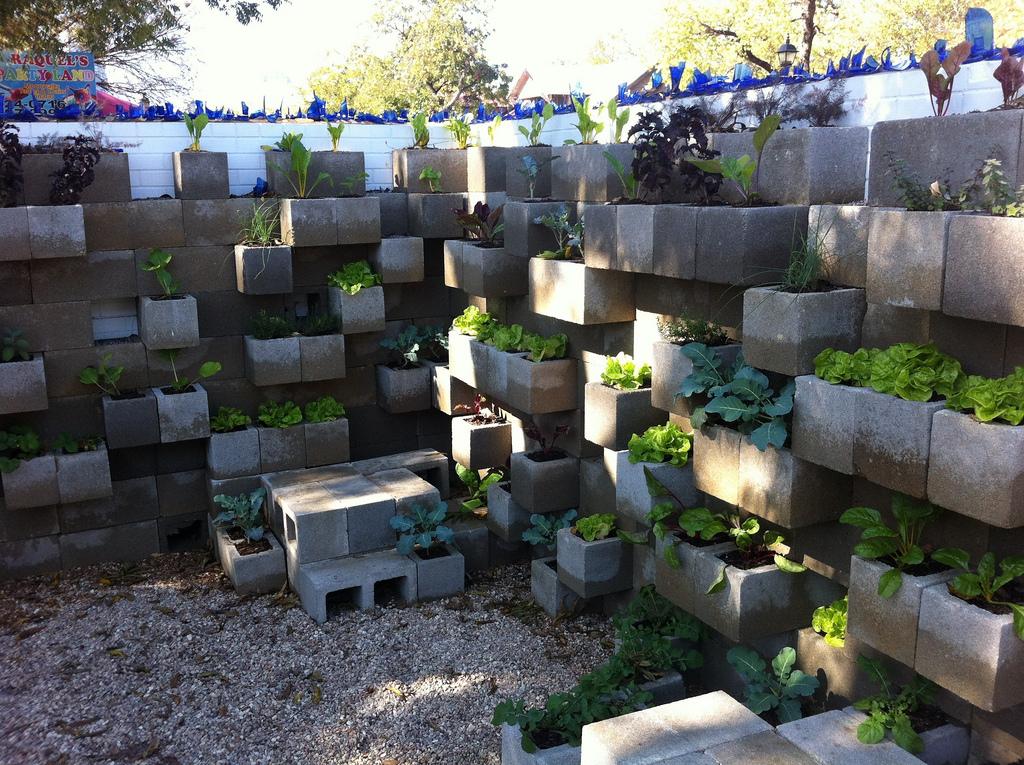 The most recognizable feature of a cinder block are the two gaping holes that dominate their surface area. These holes play an important role in a cinder block’s traditionally intended use, as they lighten the unit’s weight and improve insulation without compromising its sturdiness. Yet as many people have discovered, they also make killer planters.

Because they can withhold whatever nature throws their way, these bulwarks can easily double as immovable homes for foliage and their dirt. You can be confident that a cinder block will not only stand up to weather, but also to the plants’ own growth.

Cinder blocks are also designed to be stacked; once they are, they’re not going anywhere. If you have a touch of creativity and ingenuity in your bones, you can use this to your advantage, staggering them to create intriguing patterns that can instantly turn your backyard into a cool conversation piece.

If you have intentions of growing crops in your backyard, you don’t necessarily have to resort to buying a garden bed, or even constructing one of your own from wood. A properly placed arrangement of cinder blocks will do the trick, and do it well.

Because they’re so easily stackable, you can make the bed as high as you need. You can also fill their holes with dirt, just in case you want a little extra reinforcement. You can even use these holes to plant other vegetation, to give your garden bed an extra touch of character.

Perhaps the most advantageous part about making a raised garden bed from cinder blocks is that it gives you the opportunity to expand its size to accommodate your growing desires. You can’t move a border in a store-bought box, but you can do it here, albeit by breaking a bit of a sweat.

The holes of a cinder block aren’t just great for plant placement. They also work rather well for wooden beams. This match can be exploited rather well for your garden if you’re looking to add unique, cost-effective elevation to your greenery.

If you thread a few wooden beams through the blocks’ holes, you’ll have an instant shelving unit that daresay may be more stable than the flimsy units you may find in your neighborhood garden store. Again, because cinder blocks are so easily stackable, you can design this shelf to be as high or low as you’d like.

What’s more, you can space this makeshift shelving unit to be as long or short as possible. Its length will be determined by how many plants you’d like to place on its surface. Just don’t overdo things – you don’t want to create a unit that’s excessively busy.

If you’re worried about cinder blocks turning your garden into a concrete jungle of dismal gray, don’t fret. They can be painted to fit in with whatever color scheme you’ve already built in your garden. In fact, they make excellent canvases that will allow you to show off your creative side.

If you just want to add a pop of color just to keep them from being gray, adding a coat of paint will do the trick nicely. However, feel free to go a little nuts if you’re so inclined. Paint geometric patterns of different hues. Use the gray base as negative space. Even put a few blocks together and turn it into one multi-block work of art.

Of course, the caveat to doing this is that you still want to make sure what you’re doing matches the overall motif of your garden. Not doing so will make the block stand out, and not necessarily in a good way.

The cool thing about mixing cinder blocks and wooden beams is that they can withstand a lot of force and weight. They can even combine to hold up people if they wood is thick and sturdy enough. Because of this, you can forego the trip to your nursery’s garden furniture section and make your own bench.

Like most cinder block projects, the key to this creation is their ability to be stackable and immovable. Just determine how wide you want your bench to be, build each “end” of the bench with appropriately arranged cinder blocks, and thread the sturdy wood beams through.

Once you’ve put the frames in place, you can then take your creation to the next level by festooning it with various garden pillows, blankets, or any other similar accoutrements to give it additional character. If you neutralize the bench’s bones in their natural state, your guests won’t pay much attention to its construction. This is a good thing.

If you’d prefer to keep things natural, there’s one thing to keep in mind: spacing. Because of the way cinder blocks are designed, you will end up with gaps between the beams when you sit. It’s like slats on an old-school wooden chair, only larger.

Yet with that or any other use, you’ll find that a cinder block can be utilized as the versatile backbone of virtually any basic garden motif. Add into the fact that their usage tends to save you a healthy chunk of money, and it’s easy to see why the use of these sturdy hunks of concrete have become such an effective piece of many a person’s gardening puzzle.

Use These Butterfly Garden Designs In Your Yard

Clear the Way to These Garden Path Ideas

Keep Your Yard Safe With These Garden Fence Ideas